WHAT NEVER WAS
SELF PUBLISHED GAME 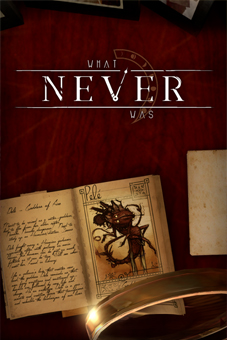 
PROJECT DESCRIPTION
'What Never Was' is a short, story-driven first-person game focused on exploration and puzzle-solving about Sarah, having to shoulder the arduous task of clearing out her grandfathers attic, and soon finds that not everything about the attic is what it seems.


WHAT NEVER WAS - Official Story Trailer
ABOUT MY WORK
I originally started working on 'What Never Was' begun as a way for me to keep up with 3D-modeling and texturing after getting full-time employment as a level-designer. To give the scene some context, I wrote up a premise for a point-and-click game that I'd be interested in making. When setting the environment up in Unreal Engine 4, I realized that I could quite easily make a first-person character walk around the small attic I was building, which in turn made me think "Then why not try to add some interaction?".

At some point, it dawned on me that I had all the tools at my disposal to create what could be a first chapter of a game, which would be a good exercise in developing and finishing a small scale project by myself. I worked in my spare time for approximately five, developing 'What Never Was'. This included learning the visual scripting language of Blueprints within the Unreal Engine, working with voice-actors and a small group of friends and collaborators, writing music for the game and eventually setting up a Steam page while taking small steps towards marketing the game.

THE ATTIC - 'What Never Was' plays out entirely in one room.

'What Never Was' released for free on Steam and Itch.io in January 2019.
On the 20th of January 2019, The Verge wrote an article about the game and on the 9th of February, famous Let's Player JackSepticEye uploaded a video of the game on his YouTube channel which has gotten over one million views. Despite having little to no marketing, 'What Never Was' had been downloaded over 100 000 times within three months, quickly garnering a review-rating of "Overwhelmingly Positive" on Steam.

Making and releasing 'What Never Was' has in every step of the way been a labor of love and the reception has been bigger than I could ever imagine. The project came with a great deal of insight into different disciplines of game development, how to work with accessibility and how to engage with - and best understand player feedback.

Shortly after release I made the game available for Mac and Linux, while also releasing three patches, addressing things like key-bindings and smaller useability issues. In May of 2020, 'What Never Was' was awarded with an Epic MegaGrant. I am currently working, in my spare time, to continue Sarah's journey in What Never Was: Chapter II.