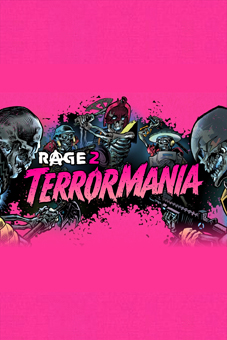 
PROJECT DESCRIPTION
The second major expansion of Rage 2. In Terrormania, you'll explore the twisted and cursed alternate reality of the wasteland, the Deadlands. Reverse the curse before the skeletal forces of darkness can break free.


FROM SCRIPT TO GAME - A cutscene from Rage 2: Terrormania.
ABOUT MY WORK
Beginning production immediately after the previous DLC (Rage 2: Rise of the Ghosts), Terrormania was a project with smaller ambitions but also a tighter production schedule. I was once again tasked with writing and implementing the narrative of this project as the sole writer and narrative designer. We refrained from using motion-capture this time which meant that conceptualizing, framing and directing the cutscenes was done in syncs between me, the animator and sometimes the game lead.

The team sought to get the player into the action as quick as possible, which meant that I worked on conveying as much information in as short a time as possible. All of the exposition would be delivered through the character of Mangoo - a fourth-wall breaking character that would previously only show up to sell the player cheat codes in the base game, which meant that the tone, while staying true to the language of Rage 2 would also allow for a bit more levity and take itself even less seriously than anything that came before in the franchise.