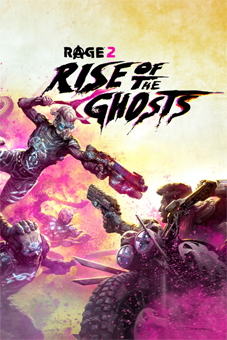 
PROJECT DESCRIPTION
The first major expansion of Rage 2. Explore a brand-new region, face a lethal new faction, and gain access to a new weapon and ability in Rise of the Ghosts.


FROM SCRIPT TO GAME - A cutscene from Rage 2: Rise of the Ghosts
ABOUT MY WORK
Wrapping up production of Rage 2, I was asked to write and implement the narrative of the two DLC expansions. I had recently released, written and produced my own small game (What Never Was) in my spare time, and I was known for making more narrative-heavy level designs in previous projects which both contributed to being asked for this new position. Needless to say, this was a big but very exciting step for me. This was my first time being the sole writer - and narrative designer for a AAA project this size.

The creative team and I agreed on what we wanted to do with the DLC's story and gameplay, and I wrote a synopsis which was feedbacked on by Bethesda, id Software and Avalanche leads before being agreed on. I created a template for cutscene scripts, worked closely with the localization team and dove deeper into the lore of the Rage universe established by id Software and the principal writer who had written the story for the main game that came before. I also had the responsibility of directing both motion capture and voice actor recording sessions. There were also technical challenges, such as learning how combat-barks were set up, triggered and dynamically responded to by a nearby character.

Since the first DLC would act as an extension of how the base-game played, I worked closely with game and level-designers to write, design and implement side-quests along with a player-friendly hub town that had a number of various NPCs, events and dialogues depending on how far the player had gotten in the story. Rise of the Ghosts was also very tonally different to what I had written in What Never Was, which was a fun challenge.